by Robert Milburn via “Barron’s”

The fast-growing and unregulated art market, invaded by art-collecting novices, has already seen a proliferation of hand-holding art advisors. Now we are seeing a new art advisor enter the market: specialist lawyers helping to settle ownership, copyright and authenticity disputes.

“Even people that have experience make common mistakes,” says Brian Kerr, partner at the recently launched art law firm Spencer Kerr. “The works being sold are of staggering value so the stakes are just too high.” That’s precisely when people reach for their lawyers.

Consider billionaire art collector Ronald Perelman, who sued fabled art dealer Larry Gagosian, claiming Gagosian “took advantage of his position of trust” and misrepresented the value of certain works. According to the lawsuit, Gagosian overvalued works sold to Perelman and undervalued pieces it bought from the collector. Among the works changing hands were sculptures by Jeff Koons and Richard Serra and paintings by Cy Twombly. In December, Perelman lost in an appeal with a five-judge panel essentially ruling that the sophisticated collector could have conducted his own due diligence.

Kerr represented London-based filmmaker Joe Simon-Whelan, in 2009, against the Warhol Foundation for the Visual Arts. Simon-Whelan purchased a Warhol silkscreen self-portrait for $195,000 in 1989, which back then was deemed genuine by the foundation. He resubmitted it to the foundation for authentication, in 2001 and 2003, just before an anticipated $2 million sale, and this time the work was twice branded a fake.

In the end, the Warhol foundation spent $7 million on its defense. Simon-Whelan eventually folded and was awarded nothing, claiming he was “deeply saddened” about being “unable to reveal the truth in court, but faced with bankruptcy, continuing personal attacks and counterclaims, I realized I no longer stood a chance of proceeding further.” Shortly thereafter, in 2012, the Warhol authentication board was disbanded.

Much of Kerr’s current work involves helping shell-shocked collectors recover scraps from among the emotional and financial wreckage, after purchasing a fake. But the law firm is also connecting its previously-burned clients with outside consultants and art advisors to help them establish clear provenance and authenticity before they buy new work.

“The goal is that when [clients] stick up their hand at an auction or buy from a gallery, that the legal side and consulting work is done hand-in-hand,” Kerr says. He adds that the consultants bill separately for their services and the law firm collects no fee for referring the business.

by Motez Bishara via “AlJazeera“ 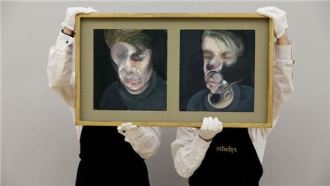 It took a breathtaking span of 26 hours in London for more records to fall in the thriving global art market.

Works by Gerhard Richter, Lucio Fontana, and Cy Twombly were among those that set the pace at the post-war and contemporary art sales hosted by Christie’s and Sotheby’s.

The anonymous bidder, reported to be an American, was represented by Sotheby’s

“I think I can genuinely say it went to someone who truly wanted this painting, and he was set on buying it tonight,” Westphal said, noting Richter also happened to be her favourite artist.

A sister painting of the large abstract work was sold by

“Richter is not hot all of a sudden, he has always been sought after,” said Arianne Levene Piper,

“There are plenty of ultra-high net worth collectors who are willing to pay for top works.

This explains why a great painting by a great artist will sell for high prices at auction.”

Works by another European artist, Francis Bacon, failed to make headlines this auction season, despite drumming up a buzz prior to the sales.