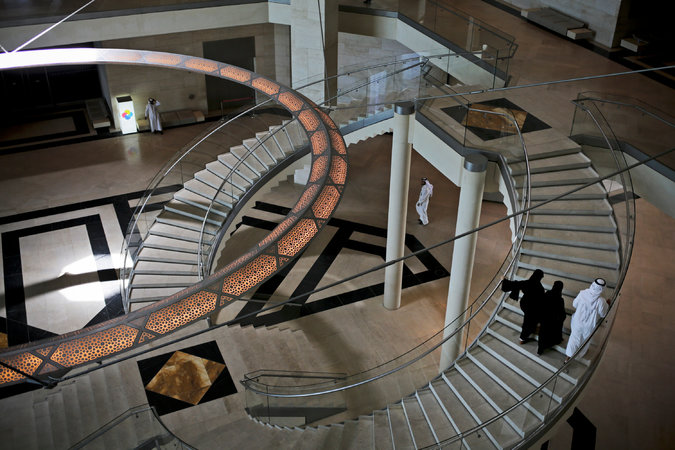 by Matt Atherton via “IBT“

An 1,500-year-old underground church has been discovered in Turkey with never-before-seen frescoes depicting Jesus and “bad souls being killed”. The church was found in the world’s largest known underground city in the Cappadocia region of central Turkey.

The frescoes have been described as depicting Jesus rising into the sky – known in Christianity as the Ascension – and the destroying of evil – known as the Last Judgement. The discovery of the church itself – which archaeologists suggest could be more than 1,500 years old – still has secrets to be revealed, as so far only the roof and uppermost part of the walls have been uncovered.

“Only a few of the paintings have been revealed,” said researcher Ali Aydin, who told the Hurriyet Daily News: “There are important paintings in the front part of the church showing the crucifixion of Jesus and his ascension to heaven. There are also frescoes showing the apostles, the saints and other prophets Moses and Elyesa.”

An urban housing project was taking place in the city of Nevşehir, where the church was found. It is part of a huge number of early dwellings, which form the largest known ancient underground city. The underground city itself was discovered in 2014, and around four miles of tunnels have been uncovered. The experts believe people lived here around 5,000 years ago.

Archaeologists have had to pause their excavations, however, as the winter humidity can damage the paintings. However, they have managed to reveal the ceiling of the structure which mainly sits underground, and were fascinated by the huge frescoes which can be found across the inside of the roof and top of the walls.

“We know that such frescoes have so far never been seen in any other church,” said Hasan Ünver, mayor of Nevşehir. “It was built underground and has original frescoes that have survived to this day. This place is even bigger than the other historical churches in Cappadocia.

“It is reported that some of the frescoes here are unique. There are exciting depictions like fish falling from the hand of Jesus Christ, him rising up into the sky, and the bad souls being killed. When the church is completely revealed, Cappadocia could become an even bigger pilgrimage center of Orthodoxy,.”

The Aleppo Codex, the oldest surviving copy of the Hebrew Bible that some experts believe all versions of the Old Testament stem from, has been recognized by UNESCO as an important world treasure.

I24News reported that the United Nations Educational, Scientific and Cultural Organization added the millennium-old Codex earlier this week to its International Memory of the World Register, which honors some of the most important discoveries relating to human history.

Adolfo Roitman, the head curator of the Shrine of the Book Museum in Jerusalem, which holds the Codex, explained its significance, stating that all current versions of the Old Testament stem, “in one way or another, from this ancient manuscript.”

Amir Ganor, director of the unit for the prevention of antiquities robbery in the Israeli Antiquities Authority, shows a document, thought to be an ancient text written on papyrus, at Jerusalem Magistrates Court May 6, 2009. According to the Israeli Antiquities Authority, the document is written in ancient Hebrew script, which is characteristic of the Second Temple period and the first and second centuries CE. This style of writing is primarily known from the Dead Sea scrolls and various inscriptions that occur on ossuaries and coffins. It was seized from two men suspected to be antiquities robbers in an elaborate undercover operation.

The Codex is believed to have been written somewhere around the year 930 in the town of Tiberias on the shores of the Sea of Galilee. It has been moved around through several different cities, and as many as 190 pages are missing from the surviving copy, though scholars disagree where and when they were lost.

It was smuggled out of Syria and arrived in Israel in 1958, before it was eventually moved to the Israel Museum in the mid-1980s.

It is also not clear who precisely owns the Codex, though filmmaker Avi Dabach, who is planning to make a documentary about the ancient manuscript, believes that it belongs to the Jewish community that fled Syria.

“In the 1960s the Aleppo-Jewish community sued the people who brought the Codex to Israel. … The Israeli Authorities decided to confiscate this item and then, from a position of strength, force on the community an arrangement,” Dabach has said.

Although the Aleppo Codex is considered the oldest copy of the Hebrew Old Testament, there are much older fragments of biblical manuscripts in existence, such as the 2,000-year-old Dead Sea scrolls. . .

“The ‘Epic of Gilgamesh’ revised”

by  Ellie Zolfagharifard via “Daily Mail“

A missing chapter has been found for one of the first great works of literature.

Researchers have discovered a new clay tablet that adds 20 previously unknown lines to the ‘Epic of Gilgamesh’.

The famous poem, which dates back to 2100 BC, tells the story of Gilgamesh, king of Uruk, and Enkidu, a man created by the gods to stop him from oppressing the people of Uruk.

The new lines from the poem were discovered by accident when a history museum in Iraq made a deal with a smuggler to purchase a set of 80 to 90 clay tablets.

The Sulaymaniyah Museum in Slemani had been involved engaging in these dealings as a way to regain valuable artifacts following the Iraq War, according to Ancient History Et Cetera.

Farouk Al-Rawi, a professor in the Department of Languages and Cultures of the Near and Middle East at the School of Oriental and African Studies (SOAS) in London was the first to spot the tablet.

After realising its significant, he purchase the block of clay, which featured cuneiform writing, for $800 (£530).

Mesopotamia was an ancient region in the eastern Mediterranean bounded in the northeast by the Zagros Mountains and in the southeast by the Arabian Plateau.

“1,500-Year-Old Text Has Been Digitally Resurrected From a Hebrew Scroll”

by Devin Powell via “The Smithsonian“

More than four decades ago, an archaeologist discovered a scroll in the ruins of an ancient settlement built near the Dead Sea. Found inside a holy ark, the fragile document was so badly burned that the scientist decided not to risk unrolling it, lest it crumble to pieces. Kept safe in storage ever since, the Ein Gedi scroll has held on to its secrets—until now.

This week a computer scientist announced that his team found a way to unroll the scroll virtually. Working off x-ray scans of the artifact, specialized software detected the layers of parchment and digitally unwound them, revealing for the first time Hebrew characters written on the scroll about 1,500 years ago.

“I’ve actually never seen the actual scroll,” says Brent Seales, a professor at the University of Kentucky. “For me, that’s a testament to the power of the digital age.”

His interest in damaged texts began years ago with a cache of old Roman scrolls unearthed at what had once been the resort town of Herculaneum. Buried during the infamous A.D. 79 Vesuvius eruption, the Herculaneum scrolls seemed like little more than cylinders of charcoal. To try and take a deeper look, Seales and his colleagues bombarded the relics with x-rays from a micro-CT scanner—a device similar to the computerized tomography scanners hospitals use to see inside human bodies, but much more powerful.

“It’s a bit expensive and time-consuming to do, but you’re able to see inside an object without destroying it,” says James Miles, a graduate student at the University of Southampton and director of Archaeovision, a company that scans ancient objects. “You can’t do this any other way.”

To suss out the contours of rolled papyri, Seales wrote a computer program. He likens the process to cartography: the density data from a micro-CT scan is a whole world of chaotic shapes and forms, and the turns of the papyri are like edges of continents that his algorithms can sketch. Sadly, his x-rays and algorithms proved blind to the carbon-based ink on the Roman scrolls, which was too similar to the carbonized papyri to be distinguished.. . .